Learn about these 10 diseases which are caused by smoking 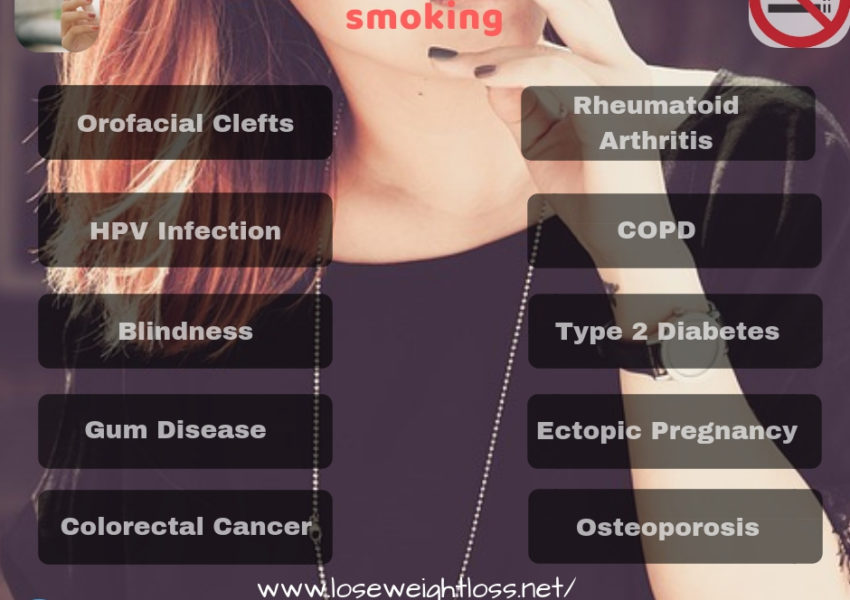 Are you a chain smoker? Do you know about the adverse effects of smoking? Are you aware of the very bad effects of consuming cigarette or tobacco in a regular basis? What are the different parts of the body which can get impacted due to bad smoking habits? The team at Lose Weight Loss (LWL) will be providing the people with proper guidelines who are thinking about leaving the habit of smoking. Do also keep in mind that, this act of quitting tobacco may take some time as it also shows some serious withdrawal symptoms which needs to be tackled.

Now, it is very important for all persons to understand about the severe health problems that are created to not only the smoker but also those who passively inhale the smoke. Do look at the number of diseases that you can become a prey of, if you do not follow the right steps. They are namely orofacial clefts, HPV infection, blindness, gum disease, colorectal cancer, rheumatoid arthritis, chronic obstructive pulmonary disease (COPD), type 2 diabetes, ectopic pregnancy and also osteoporosis. 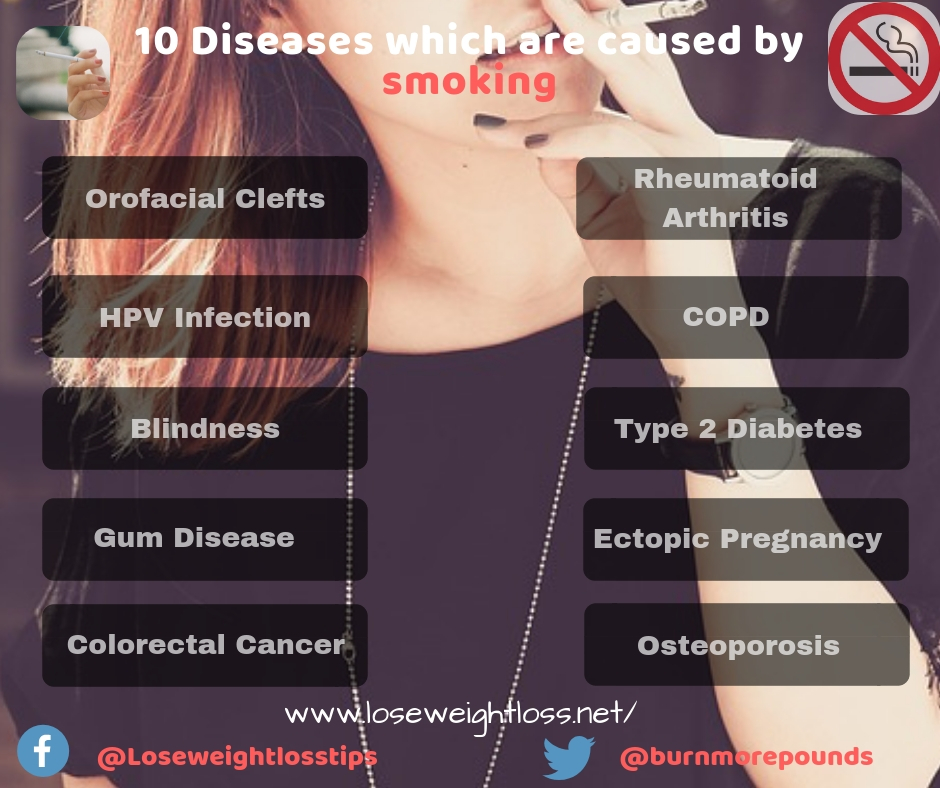 If you are wanting to know in detail about the ailments which are possible to occur, if you do not stop smoking; then you must start to read the article till the end. What are the health effects caused by Smoking? We have also showed you the right way to quit this dangerous habit.

Do remember that cleft lip and cleft palate are birth defects that occur when a baby’s lip or mouth do not form properly during pregnancy. Along with that, a cleft lip happens if the tissue that makes up the lip does not join completely before birth. Moreover, the children with a cleft lip also can have a cleft palate.

Do keep in mind that smoking can reduce fertility. One study found that smokers were over three times more likely than non-smokers to have taken more than one year to conceive. Along with that, the study estimated that the fertility of smoking women was around 72% that of non-smokers.

Up to around 120,000 people from the country and also across the world in their twenties and thirties are impotent as a direct result of smoking, and men who smoke have a lower sperm count than those who are non-smokers. Along with hampering reproduction and fertility, it can also cause testicular cancer.

The habit of smoking has long been known to cause heart disease and lung cancer; however many people do not realize that smoking can lead to vision loss. The studies show smoking increases the risk of age-related macular degeneration, cataracts, glaucoma and diabetic retinopathy and dry eye syndrome.

In addition to that, the smokers are four times more likely to become blind because of age-related macular degeneration than those who have never smoked. This epidemic is the vision loss attributable to tobacco smoking and the ophthalmologists can readily recall patients with smoking related diseases.

The gum meaning periodontal disease is an infection of the gums and can affect the bone structure that supports your teeth. In severe cases, it can make your teeth fall out. Smoking is an important cause of severe gum disease in the United States. Moreover, this buildup leads to early gum disease, called gingivitis.

In addition to that, the smoking act and using other tobacco products can lead to gum disease by affecting the attachment of bone and soft tissue to your teeth. More specifically, do note that, it appears that smoking interferes with the normal function of gum tissue cells.

The colorectal cancer, which forms in your intestines such as colon or rectum, is the second leading cause of cancer deaths in the United States. You must be be aware of the fact that more cigarette smoking is linked to an increased risk of developing and dying from this type of cancer.

In addition to that, colorectal cancer (CRC), also known as bowel cancer and colon cancer, is the development of cancer from the colon or rectum which are parts of the large intestine. A cancer is the abnormal growth of cells that have the ability to invade or spread to other parts of the body. In Our Previous post we discuss about the types of Cancer Ailments .

The rheumatoid arthritis is a chronic inflammatory disease more common in women that affects the joints in your hands and feet. It causes painful swelling that can eventually result in bone loss and joint deformity. Smoking is one of the causes, and is also associated with developing the disease at an earlier age.

Your lungs can be very badly affected by smoking. Coughs, colds, wheezing and asthma are just the start. Smoking can cause fatal diseases such as pneumonia, emphysema and lung cancer. Smoking causes around 84% of deaths from lung cancer and around 83% of deaths from chronic obstructive pulmonary disease (COPD).

In addition to that, do note that, COPD as a progressive and debilitating disease, is the name for a collection of lung diseases including chronic bronchitis and emphysema. People with COPD have difficulties breathing, primarily due to the narrowing of their airways and destruction of lung tissue.

The type 2 diabetes is the most common form of diabetes. If you have type 2 diabetes your body does not use insulin properly. This is called insulin resistance. At first, your pancreas makes extra insulin to make up for it. You need to do regular medical checkup to detect it.

In addition to that, type 2 diabetes is a chronic condition that affects the way your body metabolizes sugar meaning glucose is an important source of fuel for your body. It is a progressive condition in which the body becomes resistant to the normal effects of insulin and gradually loses the capacity to produce.

The ectopic pregnancy is a complication of pregnancy in which the embryo attaches outside the uterus. Moreover, the signs and symptoms classically include abdominal pain and vaginal bleeding. Fewer than fifty percent of affected women have both of these symptoms.

In addition to that, in an ectopic pregnancy, a fertilized egg has implanted outside the uterus, usually in the fallopian tubes. If undiagnosed, as the pregnancy grows, it can burst the organ that contains it. This can cause severe bleeding and endanger the mother’s life.

The smoking habit can cause your bones to become weak and brittle. Women need to be especially careful as they are more likely to suffer from brittle bones meaning osteoporosis than non-smokers. If you smoke, you are more likely to have a stroke than someone who does not smoke.

In fact, smoking increases your risk of having a stroke by at least by half, which can cause brain damage and death. And, by smoking, you double your risk of dying from a stroke. Also, your risk of stroke is reduced to half that of a smoker and within five years it will be the same as a non-smoker.

So now, after going through the different diseases and the adverse impact that it can have on your body, you have understood about the need for you to stop smoking from this right moment. There are no health benefits of smoking, so you must start taking the preventive measures from today onward. In a previous blogpost, we have discussed about the diseases which are occurred due to Obesity. However, do read the article till end the end before coming back here for more health hazards that you must have knowledge about. Thus, the time has come for you to understand about the things that are discussed above and take the correct steps, right away along with sharing your valuable feedback on the same without any fail!

Posted by Loseweightloss on Monday, April 15, 2019