Yoga Basics: Learn about the eight elements of Yoga

Do you know about the essential 8 limbs that constitute yoga? What are the things that all the yoga practitioners should keep in mind while practicing yoga ? Along with fitness, yoga helps you to lead a better lifestyle with the right purpose. The team at Lose Weight Loss (LWL) is going to decipher the secrets of yoga in this article.

Now, let us talk in details about the eight-fold path that forms the main components of doing yoga. There are plenty of health benefits of practicing yoga. The most important eight arms of yoga is talked about for the betters to have a better understanding the subject. There are studios in the country and abroad which are equipped to provide you with the right passage for doing some beyond yoga. Along with providing spiritual sense in yourself, it also aims to provide the yoga practitioners with the characteristics of maintaining self-discipline and teaching you about the essential aspects of morality, too. Moreover, it is also important for the yoga students to know about the different parts of it, in order to do it better. The eight different elements which are found in yoga are yama which means rules, niyama which means duties, asana which means postures, pranayama which means breathe, pratyahara which means senses, dharana which means concentration, dhyana which means meditation and also samadhi which means enlightenment. 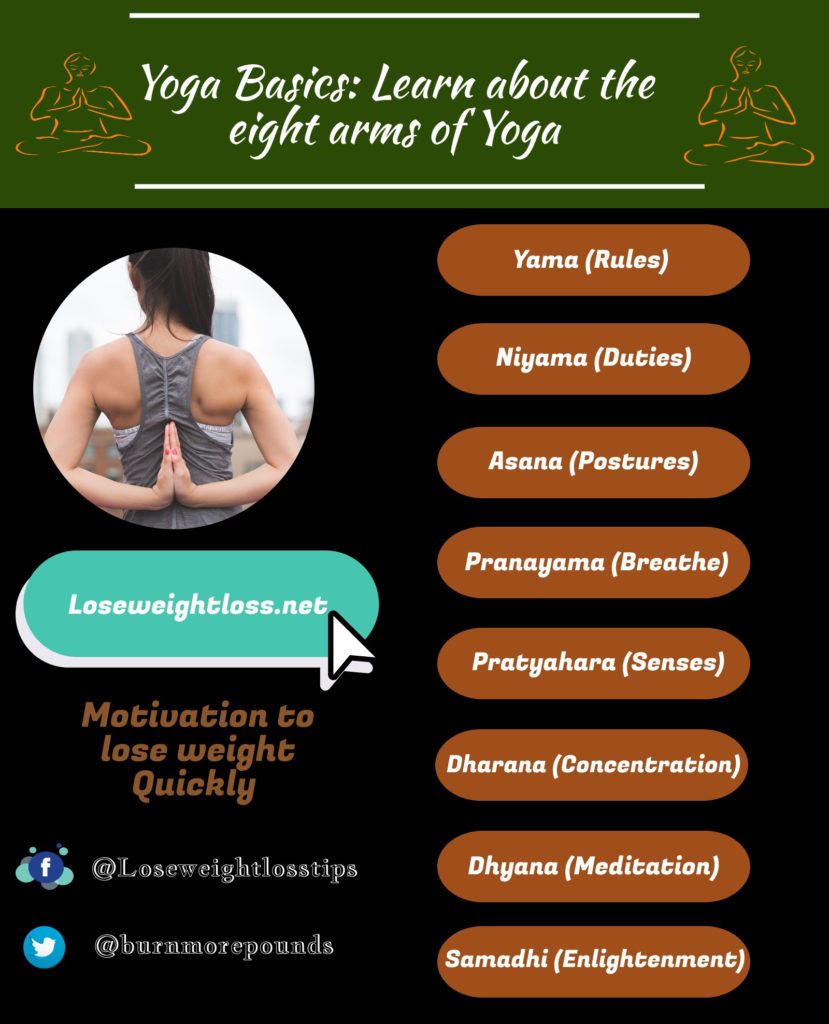 What are the mistakes that all the yoga students should avoid doing while practicing yoga? I have been going to yoga classes and performing it for long and it has helped in bring a change in my body along with helping to reduce by body-weight, now I am thinking about trying yoga and learn more about the more spiritual aspects of it in order to enrich my mind, body and spirit in the coming years, so can you to provide me with the definite guidelines in order to make it possible? To know more about this particular subject, do read this post thoroughly.

The primary arm of yoga is called as yama meaning rules. It is very vital to defines the rules of any practice to make it universal. Also, do remember that, this aspect helps the yoga practitioners to have the right guidelines in order to practice yoga in the correct form.

In addition to that, these helps the yoga students to learn about the right behaviors which turns you into your better self. The main rules which forms the pillars of yoga are called ahimsa which means nonviolence, satya which means truth, asteya which means wise, brahmacharya which means celibacy and also aparigraha which means generous.

The second arm of yoga is niyama which teach you about duties. This aspect is much useful for the purpose of self-improvement. Do remember that, discipline id an integral part of well-being and is always suggested by the doctors and nutritionists for improving your health.

This aspect is the most popular and physical arm of doling yoga. It comprises of the many form of poses or asanas. It is known to have special postures which help to cure some deadly diseases. However, you can learn these poses and start yourself as a yoga teacher , too.

In addition to that, after you have followed the first two points of yoga, you can perform these postures is the correct way. The many different benefits of practicing these varied forms of poses. Do remember that, doing yoga helps to connect between the physical body and your inner self.

The next in the list of the many stages of yoga is pranayama which means to breathe. It is very important to understand that the right respiration practices are considered to vital in doing yoga. However, it also claims to help in extending your lifespan.

Moreover, you should start doing this on a regular basis and you just need to sit and do a set of breathing exercises, one after the other. If necessary, you can take guidance from yoga experts who will help to guide you through the process in the right manner.

You May Also Like: Ways to become certified yoga instructor

Through the stage of pratyahara, you will learning about the ways to detach yourself from the outer senses and start to delve into your inner-being. This is not an easy task to perform and needs much practice. However, this step is also considered as the transition step between the many arms of yoga.

In addition to that, you will get to learn more about yourself by practicing this form of self-introspection. You will be able to learn more things about yourself and take the time to think about the things that you love to do and also some of the aspects of your life that you are should be changing for better.

This arm of yoga is very useful for people do complain of not being to concentrate on focus. You must know that, this is most needed for those who study and work like teenagers and adults. It teaches you to increase your power of concentration by focusing on an object or point for long.

Moreover, in a later post, we are going to talk about the best superfoods that you must have in order to increase your focus and productivity, so do come back later for it. Also, do know that you can meditate in the right manner when you start concentrating in every session.

This particular aspect of yoga deals with contemplation in yourself. Through it, you also get to enjoy consciousness which is a state of mind. Also, do remember that, most people tend to get confused between the stages of dharana (concentration) and dhyana ( meditation ).

In addition to that, it is also called as the perfect pose. You need to know that while performing this part of yoga, Your main aim is to remove any kinds of thoughts from your mind and the more you practice it over time, you will be have more stamina and try to stay to it for longer.

The final part of yoga is samadhi meaning enlightenment. The main aim of doing it is to connect with the divine one with the help of meditation and self-realization. Do also know that, you can also reach a state of inner peace by practicing enlightenment.

Moreover, it is also called as the final stage and help you to thrive in the goal of having a sense of bliss. It also helps to provide you with ultimate fulfillment and move over from the never-ending wishes, desires and hopes which binds the life of a person.

So now, these many aspects of doing yoga is very important to know for all the yoga practitioners. These eight useful concepts of yoga is known to give you the proper direction in life and add meaning to it. It helps to provide you with a unique synthesis of brain, heart and the body. Most people believe that yoga is a set of stretching postures for getting fit but there are many more hidden aspects of yoga which needs to be discovered for bringing out the better in yourself. The good habits that you will imbibe in yourself after doing yoga are being kind, grateful and also honest. In addition to that, this will help you to delve into the different aspects of yoga philosophy. Thus, the time has arrived for all the yoga students and teachers to practice each and every elements of yoga which we have explained in the post above and not forget to share their valuable experience with us!

You May Also Like: How Yoga Apps to lose weight Quickly

Posted by Loseweightloss on Thursday, September 6, 2018