Top 10 Healthiest Cities in US

Do you consider yourself healthy? Do you think that the city that you are currently residing in USA is healthy to live in? What are the parameters that matters in order to decide whether a city is healthy for the dwellers or not? Lose Weight Loss (LWL) will help you to find out.

Now, let us discuss about the cities which are healthy compared to others in the country and good for people who are suffering from various aliments as the environment and the consciousness of the residents of that particular city is to have a better living. It is important, for all to note that, there are many cities which have greenery and clean air, but we have picked these names dues to various reasons in relation to being healthy. They are Scottsdale at Arizona, Honolulu at Hawaii, Irvine at California, Burlington at Vermont, Cambridge at Massachusetts, Arlington at Virginia, Chicago at Illinois, Austin at Texas, Salt Lake City at Utah and also Washington, DC. Also, do understand that size and number of residents does not matter but the quality of living in terms of health is the most vital factor that works. The energy of the fellow residents motivates you take the right step for being a more fitter person. If you are fitness enthusiast then we already discuss about the best US cities for runners. 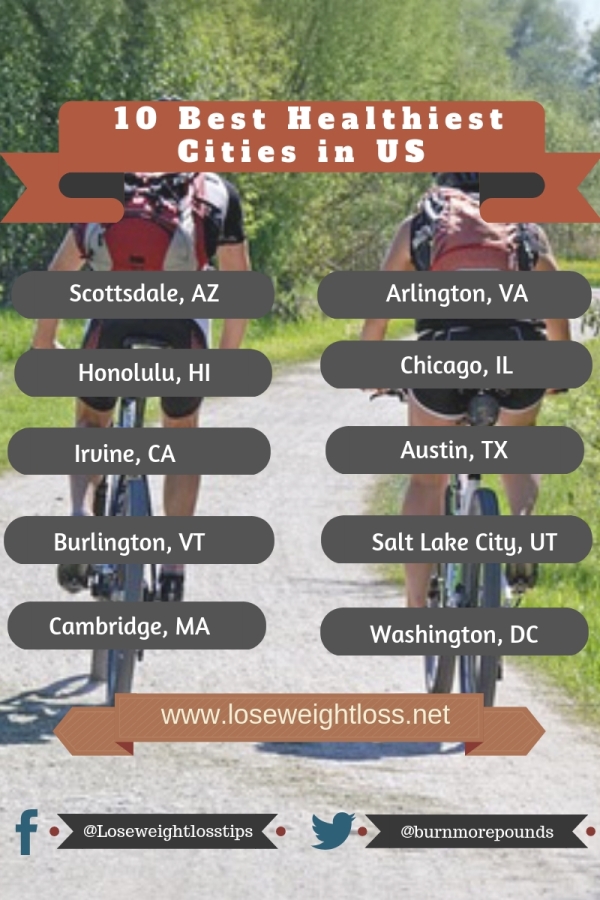 Can you tell about the vital steps that I need to implement in my daily lifestyle in order to become more healthy? What are the mistakes that are regularly committed by unhealthy people? What are the most essential healthy activities? Which are the US healthiest cities ? To have a better idea, you must read the blog.

Scottsdale is one of the largest city in the state of Arizona and Scottsdale received high marks in the fitness category, which took into account the number of weight-loss centers, fitness clubs and recreation leagues per capita and is first in the list.

In addition to that, Arizona’s destinations and people are recognized nationally in a variety of ways. For better or for worse, you nust visit one of the best cities in the state of Arizona to enjoy your health vacation.

Honolulu is known as the capital city in the US island state of Hawaii scores well in environmental factors with few cases of polluted drinking water or air. From Hanauma Bay, a popular snorkeling site, to Diamond Head, a former volcano, Honolulu is loaded with places to hike, bike, swim and play.

Also, do note that the residents here enjoy warm weather, golden sand beaches, and lush tropical forests allowing them to swim, surf, golf and hike year round. So, it’s easy to understand why most of Honolulu’s population engages in some type of exercise on a regular basis.

Irvine is a planned city in the California and the high health meter for the residents of Irvine, CA stack up against other areas in CA in terms of leading a healthy lifestyle because of the location of the particular place.

Moreover, you must understand that healthy living goes beyond whether residents have access to affordable, quality doctors and hospitals. A city’s health takes into consideration the choices residents are making to lower their personal health risk.

Burlington is a city with most population in the US island state of Vermont and you will be surprised to know that Burlington became the first city in the country to run completely on renewable energy.

In addition to that, the high marks for prevention and the number of women keeping up with health checks, along with its emphasis of the emphasis on exercise and fitness. According to some research, the city has also found itself in the list of healthiest city for men.

You May Also Like: 10 Best Cities worldwide ideal for runners

Cambridge is one of the cities in Massachusetts state of USA where it is situated directly north of Boston, across the Charles River, it was named in honor of the University of Cambridge in England, an important center of the Puritan theology embraced by the town’s founders.

Also, even covered in snow, the city remains a highly walkable city. Business owners, residents, and city workers do their best to keep an extensive network of sidewalks and paths clear throughout the year, creating a great opportunity for those looking to get in some exercise on their way to work or while running errands.

Arlington is a city within the state of Virginia and almost all the residents off the city can access healthy foods and places to exercise. A high percentage of residents who engage in healthy behaviors like exercising regularly, carpooling to work, recycling, not smoking and drinking in moderation.

Moreover, the city is located across the Potomac River from Washington D.C., and home to The Pentagon, Arlington is filled with parks that offer great hikes, athletic fields, and leisurely strolls and private fitness centers.

Chicago is the largest city in Illinois state of US and healthy Chicago 2.0 is an action plan created by hundreds of residents, health care providers, government agencies, community and social service organizations, foundations and public health experts.

In addition to that, the people in the city are working together to make sure that all Chicagoans have access to resources, opportunities and environments that maximize their health and well-being and it is a true fact that communities require access to resources in order to thrive.

The capital city of the state of Texas in Austin and wellness has become an increasingly important factor for companies deciding where to locate their operations. While some fitness fanatics in Central Texas would argue that Austin is the best place in Texas to stay in shape.

Also, the survey should also be taken for the purpose of finding the most livable city in the country given city to the level of fruit and vegetable consumption and the availability of fitness clubs per capita.

The most populated city of Utah state is Salt Lake city and the city is known for being health-conscious and people think that there must be some magic in the water in Salt Lake City.

Moreover, there are some of the factors indicating a healthy lifestyle included the number of sports leagues in the area, the amount of park space and the percentage of adults who walk or bike to work or for leisure purposes.

Washington city is part of the Washington capital region and the cities with strong community fitness have more strengths and resources that support healthy living and fewer challenges that hinder it.

In addition to that, the capital city of the country is not good for runners but however, the environmental factors, such as access to parks and walkability, also contribute to how fit a city is which was according to the survey that was conducted.

So now, you must consider yourself lucky if you happen to be living in one of the cities which are mentioned in the above list. You must be on the lookout for three things while choosing a place to live in such as being affordable, having access to various services along with the quality of life which is enjoyed by the people of the particular area. Do, also remember that having proper infrastructure in terms of development of the health for the people is very important for the proper well-being of the city. Moreover, you must also consider the health care facility available, the health condition of the people living there in addition to the quality of foods which are served as per proven standards. This list has definitely made the search much more easier for the health-conscious people. Thus, the time has come for the readers to live in these places and share with us about your valuable feedback on the health environment.

You May Also Like: Healthy Cooking Apps for iPhone and Android

Posted by Loseweightloss on Wednesday, October 17, 2018