10 Best cities worldwide which are ideal to run

Are you a regular runner? Do you attend marathons that are held across the globe? What are the things that every runner should follow in order to run longer and stay healthy at the same time? The Lose Weight Loss (LWL) team will tell everything about running tracks.

Now, we will discuss about the advantages of roaming or traveling to various cities and towns in the world and imbibe their fitness culture in order to become more healthy at the time of going to different destinations. The cities around the world which are mentioned in this post are loved and favored by the running enthusiasts and can help to bring a change in your fitness by following the correct routines. The names of places are the cities of London in UK, Sydney in Australia, Vancouver in Canada, Tokyo in Japan, Buenos Aires in Argentina, Hong Kong in China, Auckland in New Zealand, Barcelona in Spain, Cape Town in South Africa and also Pittsburgh in USA. In addition to that, you will have the unique experience if dealing with different weather conditions and also find out the places which are most suited to your fitness program. 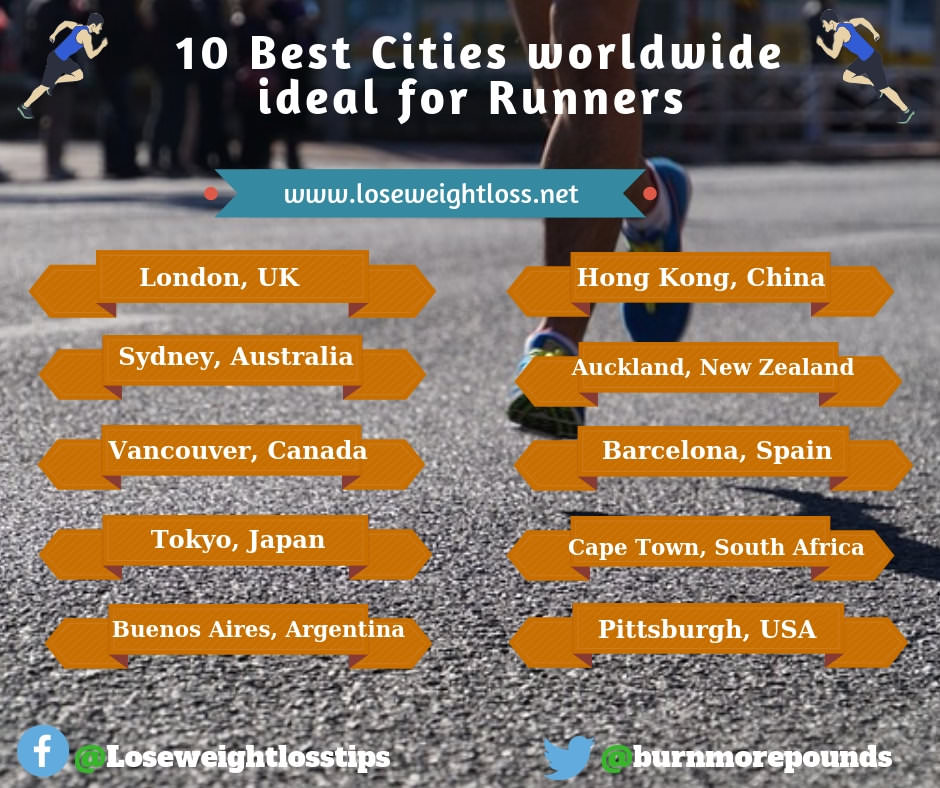 What are vital mistakes that you should always avoid while running in foreign lands? What are the major safety measures that needs to be taken for running in different tracks across the world? I am an amateur athlete who want to go to many places in the globe and try running for the sake of fitness, so can you guys find the most ideal places to fulfill my goal? What are the best cities worldwide for runners? Get to know more about it in this article.

The first place in the list is London which is the capital of United Kingdom. This historical city has many kinds of options for you begin your running adventure. there are many royal parks for you to enjoy your running activity.

Also, the other places which are considered very handy for the runners are the lanes around the buildings which have lower traffic. Do not forget to try out running in the paths which are laid down along the river Thames.

You May Also Like: Healthy Cooking apps for Android and iPhone

The city of Sydney is one of the largest cities in the country of Australia in the Oceania continent. This health-conscious city has a lot of options for runners in the form of Coogee beach along with Bondi beach which ideal for fitness lovers.

The running-friendly weather also adds up to the enthusiasm of the local running community who are found to be using the various gardens, parks and beaches around the city to their maximum benefit of staying healthy.

Vancouver is a large city in the country of Canada which is situated in the North American continent. The city is called as one of the healthiest cities worldwide. All the good running trails are available in this place.

Moreover, the place is surrounded by beaches, mountains along with runs along the oceanside. If you visit the city to run, you should first head for the longest uninterrupted waterfront track in the world known as Seawall Trail having a distance of 17 miles.

Tokyo is the biggest city in Japan which is found in Asian continent. Do come to the place to run along the river trails. It has a number of palaces such as Imperial Palace and Akasaka Palace which are good for the purpose of running.

In addition to that, you will find many parks to begin your morning running routine in Koganei Park as well as Yoyogi Park. However, you are advised to live in Japan during the months of March and April when the weather is most healthy.

The next city in the worldwide running-friendly places is Buenos Aires. It is the capital region of Argentina which falls under the South American continent. The city is loved for its vibrant culture and hosts famous runs.

Also, you are advised to visit the city during June month. The different choices for the runners which includes the Reserva Ecológica Costanera Sur, Parque Tres de Febrero, the port area of Puerto Madero along with the busy Av. 9 de Julio.

Hong Kong is one of the biggest cities in China being part of the continent of Asia. Once, you visit the city, you will be treated a with a large network of running tracks which are much popular among the healthy tribe of this place.

Start your fitness run from Victoria Peak which has many running routes of the city such as Peak Circle Trail along with Bowen Road trail which runs for around 2.5 miles. Along with Happy Valley racetrack, the tracks along water bodies are told to be good for running.

Auckland is a major city of New Zealand which is part of the continent of Oceania. This is a city which has ample amount of natural beauty around it is enough for making your stay much more healthier, providing harbor to both Pacific Ocean along with Tasman Sea.

The different running trails which can be used by the fitness freaks for the dose of oxygen are Pakuranga Pathway, Tamaki Drive and the roads along the coastline. Do remember to go to the many parks which you will find across the city.

One of the largest cities in the country in Spain is Barcelona which is in European continent. The place has many historical monuments has ample places available for those who wants to find running trails. Also, try out the option of doing tourist run.

Moreover, the city is famous for being popular among healthy people. You can run along the convention center and the downtown hotels. Also, do not forget to visit the Parc Collserola, trails along the Besós River and the many parks.

Cape Town is one of the largest coastal cities in South Africa which is in the African continent. The landscape across this city consists of the Cape Floristic Region. This is also famous for being a port city having varied geography.

In addition to that, the many running places for you to choose from includes Sea Point Promenade, Table Mountain, Lion’s Head along with Camps Bay and many beaches. You have all the necessary elements that you will ever need for outdoor running.

The ultimate city in the list is Pittsburgh in the state of Pennsylvania in the United States. It is also known as the steel city. Being at the point of meeting of three rivers, making it more favorable for the running community because of the many loops and trails.

Do also, not that the hilly landscape adds to the excitement of the runners. The places to find them are along the Monogahela River; parks such as Frick Park and Schenley Park. You should also visit the Heritage Trail.

Now, these many places have opened up many more options for both amateur and professional runners who wants to up their fitness level and try out new challenges in the need to stay fitter. However, if you are current resident of one of the cities which are listed above, you will be happy that, you are part of the best fitness running environments in the world. Moreover, you should also know that, the cities have the adequate infrastructure which provides the best running trails from anywhere worldwide. By seeing like-minded fitness enthusiasts running, you will also find the energy and urge to start running through them. Thus, the time has arrived for the people whole love to run and experience all the tracks and then pick up the ones which you favor the most. Also, never forget to provide the available feedback to our readers in the below comment section!

Posted by Loseweightloss on Monday, October 15, 2018